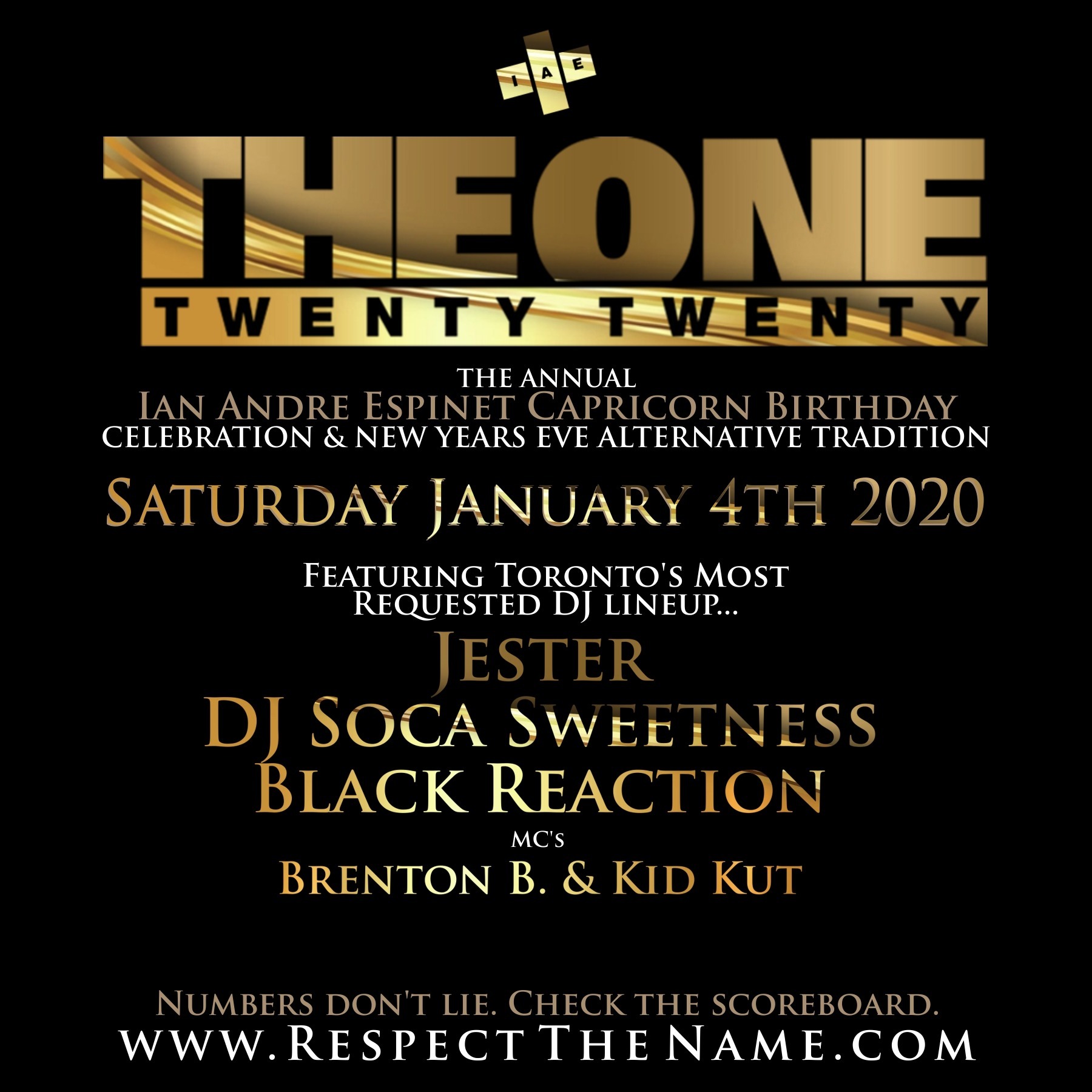 Submit & Continue
As we enter our 20th year... we return to our origins.
THE ONE | TWENTY TWENTY
Homecoming
The Annual Ian Andre Espinet x Capricorn Birthday Celebration & New Years Eve Alternative
Celebrating the birthday of Canada's Top Promoter & the First, Last & Greatest sign of the Zodiac.
The Premier Formal Event of the New Year featuring DJ friends representing my most prized & significant signatures including those representing the legacy, the present and the future:
Amnesia | Big People Fete | Trilogy at Kajmere | Soul Kitchen | ICON | WhiteSands | B.I.O. | A Rollerskating Jam Named Saturdays | GroovEssentials | WhiteSands et.al...
Taking place
SATURDAY JANUARY 4TH 2020 | 10pm-3am
and featuring the now-annual, New Years Eve countdown
FEATURING AN CANADIAN ALL-STAR MUSICAL LINEUP:
The return of the Canada's Most Versatile DJ
JESTER
[ Soul Kitchen | Ubersoca | Passion | Seasons Dubai | ICON ]
SOCA SWEETNESS
[ GroovEssentials | Icon | Soul Kitchen | Once It Sweet | The Buzz
Shine Miami | Frenzy [Trinidad, Miami & 6ix]
SSS Fete (NY), The Getaway (Cayman Islands), Bermuda, Jamaica & Cropover]
and making their return to THE ONE
BLACK REACTION
[ whitesands | Icon | moments of life | when dance did nice | fresh ]
with MC'S
KID KUT
BRENTON B.
and special guests T.B.A.
Taking place inside the historic venue formerly known as The Capitol Event Theatre
Re-incarnated and restored to it's glory in 2020 as...
THE MIDTOWN EVENT THEATRE [THE MET]
2496 Yonge Street (just north of Eglinton] | Uptown
Toronto
ABOUT THE VENUE
The Curtain Rises
The year was 1918 when the historic Capitol Theatre began captivating the imaginations of audiences. Located UPTOWN just north of Yonge & Eglinton, the theatre featured vaudeville shows and silent films. Records show the venue was originally built for Mr. McClelland, who arrived in Canada from Kingston Jamaica (brap brap).
Originally capable of seating 1300 patrons, the theatre possessed a stage to accommodate vaudeville and a space near the stage for musicians. In 1924, a balcony was added. In the 1990s, it was a second-run movie house, featuring films that were not recent releases.
The Curtain Closes & The Lights Go Out. The End Of An Era?
The Capitol shut its doors as a movie theatre in November 1998, however, the old movie house was saved from demolition. After a 2 million dollar reno, The Capitol was lovingly restored to its former glory and re-opened as a special event venue named the Capitol Event Theatre. Though the seating had been removed, the high ceiling, stage and ornate interior detailing were maintained with several modern comforts added for guests to enjoy in the city's premier special events venue!
HISTORY OF THE ONE
In 2000, THE ONE made it's debut at the legendary Kajmere nightclub on King Street. Two years later, in search of a more upscale venue, the event was relocated Uptown to the The Capitol Event Theatre, where it was hosted for numerous years before moving on... In subsequent years, THE ONE has played host to to: 6 Degrees, The Courthouse, This Is London / Product & Barcode, and Cube. Over the years, the
Semi-Formal Dress Code
TICKETS AND BOOTHS ON SALE NOW AND MOVING QUICKLY..
Both will sell out.
$30 tickets available in stores & online until sold out at www.TicketGateway.com
Tickets available at the door.
Authorized Ticket Outlets
DOWNTOWN TORONTO:
Play de Record | 411 Spadina Ave | 416.586.0380
SCARBOROUGH:
Broadway Fashions | Scarborough Town Ctr | 416.296.0609
BRAMPTON EAST:
Shine Salon | 50 Sunnyvale Gate | 905.790.3031
ONLINE EXCLUSIVELY
www.RespectTheName.com | DestinationYYZ.com
@ticketgateway.com
Inquiries | bottle service
Info: 416.995.7440 | Ian@Amnesia.ca
'like us' on Facebook.com/RespectTheName
'follow us' on Twitter | Instagram - IanAndreEspinet
GOVERN. YOURSELF. ACCORDINGLY.
It's time to
GET READY.
GET DRESSED.