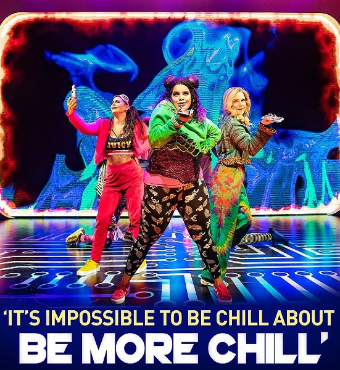 Be More Chill is a musical with original music and lyrics by Joe Iconis, and a book by Joe Tracz, based on the 2004 novel of the same name by Ned Vizzini. After a 2015 regional theatre production, the musical premiered Off-Broadway in 2018.

“It’s impossible to be chill about BE MORE CHILL”

With a score full of addictive earworms and a universal, sci-fi tinged story about the competing voices in all of our heads, this “fantastically funny” (The Guardian) musical “fizzes with feel-good energy” (The Stage) and features “an absolutely terrific young British cast” (The Telegraph).

It’s just your atypical love story – a guy (he wants to fit in), a girl (she wants to be noticed), and the supercomputer inside the guy’s head that tells him what to do (it wants to take over the world!). Tickets are selling at super high speed — get yours NOW before they’re gone!